We have survived our first major-ish parenting moment as of 9:45 this morning. Sweet John Paul came through his surgery with flying colors, and proceeded to come out of anesthesia smiling and cooing at the astounded attending nurses. When we were finally allowed into the recovery room to hold and nurse him, he was perched on a nurses’ hip batting at the ID cards hung round her neck and sucking on his paci like nothing had happened. 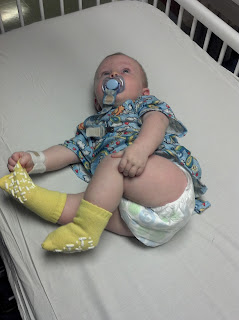 My children are both tougher than I am.

We have been praying for half a year for this morning, and while it wasn’t a majorly invasive procedure, it was still surgery, there was still a 2 hour chunk of time where he was anesthetized and intubated, and he was still treated to a rocking epidural (a caudal block, more precisely) that was at least as good as mommy’s birth day cocktail. (Though from the looks of his charmed recovery, it may have been even better.)

Yesterday after Mass, we approached Father to ask for a blessing and prayers for healing. He one-uped us by ushering us into the sacristy and proceeded to perform the Anointing of the Sick (also called Extreme Unction), which was a beautiful and unexpected gift. It is the one Sacrament I’d never witnessed, and it was quick, profound, and powerfully reminiscent of his Baptism just a few months earlier. God is so good, even when His answers aren’t ours.

This afternoon while JP slept off his buzz, Dave and I were remarking on how all our prayers of petition and intentions for his healing were not answered the way we were hoping (miraculous intervention) but were realized instead through medicine. And that is still a miracle.

Sitting in the bright, beautiful waiting room of Rocky Mountain Children’s Hospital and interacting with the kindest, most professional medical staff, we were so grateful. Grateful for a job that provides insurance coverage to be able to seek the best treatment, grateful for living in a big city with cutting edge facilities and incredible doctors, grateful for living in a country where the very best medicine is being practiced, and where access is truly available to anyone who needs it (and don’t let anyone tell you otherwise – we have enough doctors and nurses in the family to know that this is the reality. No one is turned away. Even to the hospital’s detriment.)

So I guess I’m just grateful; grateful for a little man who is sleeping in the next room over, all stitched up and slightly bruised, but headed towards a full recovery, and grateful for our friends and family.

I’m also grateful for a wonderful husband who held my hand, bought me more coffee than was wise this morning, and lightened the mood by bringing me into the 21st century this afternoon via Youtube. I don’t know what was more disturbing, the song itself or the reality that I was somehow wholly ignorant of a phenomenon which had commanded more than 500 million views.

It turns out going to be before 9 pm has real consequences people.