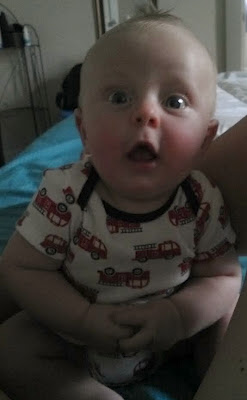 You are sleeping sweetly right now, the first night of your short external life that you’ve ever (EVER) gone down before 8 pm, and so to celebrate, I thought I’d pen a ballad for you.

My sweet second boy, where do I begin? Being pregnant with you was nothing like the first go-round. I was too busy with an external baby/toddler to spend much time obsessing over my internal offspring…until you arrived a full month later than your big brother did. Clever boy, you sensed mommy’s distracted mindset and made sure you had my full attention before debuting at week 41.

You nurse like a starvingstarvingstarving animal. You have since you popped out, and I expect you will continue to until you wean. Seriously, you nursed for nearly the entirety of your first hour outside me, and you still spend the majority of your waking and partially-waking hours begging for food.

You are a little chunker for it, too. I’ve never seen a man so enjoy his meals, and I’ve never seen anything cuter than your fat little cheeks working so furiously to get just one.last.drop of milk. As if that would satisfy your ravenous appetite.

Speaking of nursing, you have a curious and delightful little habit of flipping me the bird while you drink up. Seriously. Just that one middle finger, extended and resting on my chest, letting me know exactly what you think of my response time to your cries of starvation. Or maybe it’s just a coincidence…

You gave us a scare in the hospital, and you are slated for a relatively uncomplicated (though still necessitating the use of general anesthesia) surgery this fall, and this has caused my heart to ache and grow in ways I never knew possible. After the shock wore off, I found that I was somewhat guarded towards you, almost as if I didn’t want to get too attached just in case, you know… isn’t that awful? I was also suffering from terrible post-partum depression, making it that much more difficult -no, impossible – to feel like I was bonding with you.

One of the first clear signs I had that things were getting better came one evening while I was just holding you on our bed, kissing your cheeks and feeling the downy fluff on your scalp and whispering over and over again  ‘I love you JP, oh I love you.’ That’s when I knew the clouds were parting and the dark time was passing away.

You look like a little old man with fat cheeks and a mostly bald head. You have little fat pouches under your eyes and they crinkle when you smile or laugh. And oh, your laugh. It is one of those laughs that invites everyone who hears it in on the joke; it’s so contagious. You have delicious fat rolls around your thighs and neck and after having a slim jim for a firstborn, your chub is so, so edifying to a nursing mother. You are that fat because of me, because of my effort and nourishment of you. It’s amazing.

When you smile, you smile with your entire body, launching yourself forward in delight and cracking your gummy smile as wide as your mouth will allow. You are pure joy, except when you are pure rage, and the latter is generally correlated with hunger and/or your arch enemy, the carseat.

John Paul Francis, you are such a little love. I thank God for the privilege of being your mama, and I have to tell you, it’s sweeter for what was bitter having come before.