So I spent the last week in Rome, (rough, I know) and having now sufficiently recovered from post partum jet lag (which sounds exactly as terrible as it is), I thought I’d share a little of the wonders of our surprise pilgrimage with you.

It was kind of like this: ‘surprise, you thought you were going on vacay, but you’re on a pilgrimage.’

But in reality it was more like, ‘whhhhhhhhhhhy is this soooooo hard?’ whine whine wine wine whine…and the baby cried, too.

I know, I know… I’m a terrible ingrate for saying so, but I have to be honest…it was probably one of the most difficult weeks of my life. And it’s probably not a great stretch to say it was one of Dave’s, too, thanks in large part to my utter emotional instability and both my and the baby’s severe aversion to heat and humidity (Which, in a 2,000+ year old city of 5 million people with little to no AC and endless journeys via public transportation, is a gawdawful exercise in sweat and tears.)

I debated whether or not to fess up about how difficult this trip was for me, because A. I realize how insanely blessed and fortunate we are to be able to go not once but twice in two years to the most spectacularly beautiful and religiously significant city on earth with each of our babies, to hang out very near the Holy Father and pray with some of our most beloved and admired saints. Admittedly: awesome. and B. nobody likes a whiny blogger.

But I would be lying if I said it wasn’t very, very hard. And that the hardness blindsided me. And it made me realize some hard, hard things about myself and about this time of life. And it scared me.

I don’t regret going, not for a second. We had some truly amazing opportunities, thanks largely to Dave’s job and our very cool boss, and we did everything from a cocktail party at the villa of the U.S. ambassador to the Holy See to a black tie dinner honoring all of the newly-installed American bishops, including our beloved former Archbishop Chaput and our newly-beloved Archbishop Aquila. And I changed JP’s diaper on the floor of St. Paul outside the wall, which will surely factor significantly into his future vocation. 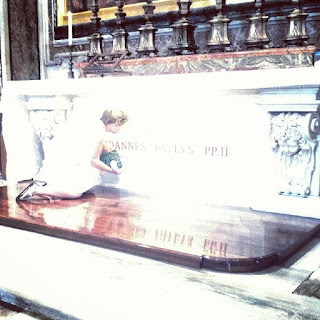 Hands-down the highlight. And worth every moment of suffering and inconvenience to get there.

Having just concluded Sunday mass over the tomb of Bl. John Paul II in St. Peter’s basilica (and celebrated in polish by a priest from Warsaw, no less) I hustled my arrogant American self up into restricted territory and my boy met his namesake. Touched his tomb with a tiny fist. All before the Vatican guards could shoo us away. (And that ain’t no photo retouching you’re seeing there. I suspect it’s the blinding glare of the Holy Spirit, personally.)

But still…it was so hard.

And here’s the thing; it would have been hard under the best of circumstances, I think, because of me. Or more specifically, because of something that afflicts me — Dave is so good at correcting me when I misspeak, reminding me that I am ‘not my illness.’

The embarrassing, inconvenient and inescapable truth is, I suffer from clinical depression. And while it’s usually pretty well controlled by drugs and gritting of teeth and tugging of bootstraps, this pregnancy and post-partum period had been hell.on.earth.

It’s hard to admit this to a room full of my closest friends, let alone to put it out there on the internets, but I figured if any other mamas out there are going through it, I owed it to them to be honest. Because there’s depression, which I’ve had all of my adult life…and then there’s post partum depression.

And honestly, it’s harder than hell.

I really thought that a week away in a gorgeous foreign city with my husband and sweet newborn would be just what the doctor ordered, but it turned out I couldn’t outrun it. Which makes sense, complete and total sense, because it isn’t a matter of ‘shaking it off’ or ‘snapping out of it;’ it’s real, and it’s bigger than I can handle by myself and, quite frankly, it’s terrifying.

It’s scary to be exactly where I always wanted to be, vocationally speaking, and to still feel so bad.

That has been the greatest suffering of these past few months I think, knowing that finally I have everything I’ve ever wanted and am living the life of my dreams…and it’s still not ‘enough’ in the sense that it hasn’t cured me of depression.

If anything, it has heightened the emotional aches and pains by adding physical sufferings like sleeplessness, short tempers, and a saggy, floppy mommy body to the mix.

There’s something very raw and real and frightening about being ‘at the top,’ so to speak, and coming to the sickening realization that it’s still here, this shadow from hell, and no amount of brilliant sunlight has managed to dispel it.

I love being a mom. I love being married. Most days I love what I do for work…but despite it all, I still feel so terrible right now, and it’s so, so scary to think that this might just be how life is going to feel from here on out.

I hesitate to hit ‘publish’ on this one for a couple reasons, primarily my own pride which is screaming at me not to do this, not to publicly air this bit of soiled laundry, to keep pretending that everything is fine and good and, while difficult, nonetheless manageable.

But it isn’t fine. And it isn’t even manageable any longer. Rome showed me that I have, indeed, a breaking point of my very own and I have reached it. Looked it in the eye while running past it, in fact.

So here I sit on the other side of ‘it,’ broken down but still functioning. I know there is grace here in this time, and I know in a dry, intellectual sense that this isn’t forever…I have hope that the right combination of consecutive hours of sleep and evened-out hormones and perhaps a different medication can and will bring me back into some semblance of normal.

But for now, it’s all hard. Everything is hard, and everything feels much bigger and scarier than it really is.