To my sweet Joey who braved the crowds with me this day last year (and helped me slip past an Italian police barricade) to witness the beatification of our hero, Bl. John Paul II, in St. Peter’s Square on Divine Mercy Sunday. 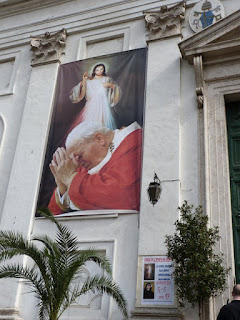 “No no you will CRUSH the bambino!” (police scare tactic/Italian dramatics. I was undeterred) 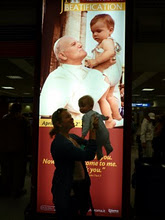 Being sheltered from the beating sun by an umbrella held by an adoring German couple, who were also quite intent on feeding my 7 month old an apple.

Nursing a sweaty, sweaty Ergo-riding Joey in a paramedic tent after the Mass while perched on the edge of a stretcher…I was such a novel sight that VIP treatment was afforded at every turn. 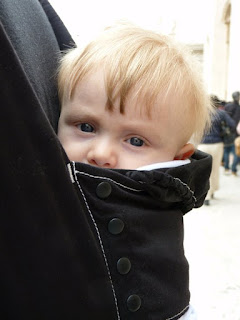 Being shoved against the crown barricade when in came time for Communion and having an Indian priest reach through the crown and physically lift me up over other people in order to receive Jesus, before bustling me (and Joey) back from the crush of humanity – the only moment of the day when I was a teeny bit scared and perhaps regretting my decision to take a baby into a very emotional crowd numbering more than 1 million. 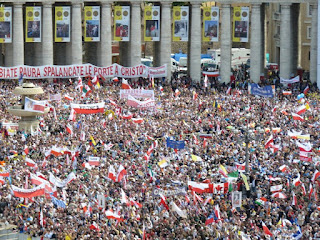 Scanning the horizon looking for Dave, who was perched up on the south Colonnade with the rest of the media, taking pictures and video. 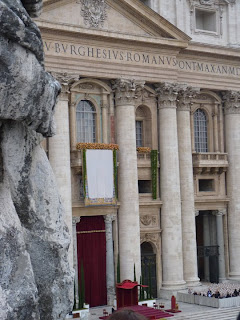 The overwhelming smell of roses that flooded the otherwise highly aromatic crowd of unwashed humanity baking in the sun during the moment JPII was proclaimed ‘blessed’ by Pope Benedict – unreal. Friends who were outside the Square blocks away reported smelling roses in the streets…Our Lady was most definitely present that morning. 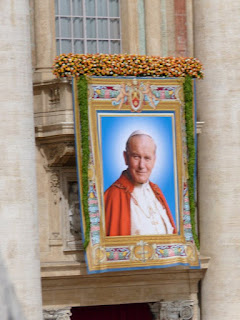 Such a magnificent memory for our family — how I would love to sweeten it by marking this first anniversary with a new birth day (hint, hint interior baby)

Tom Petty and my Chiropractor