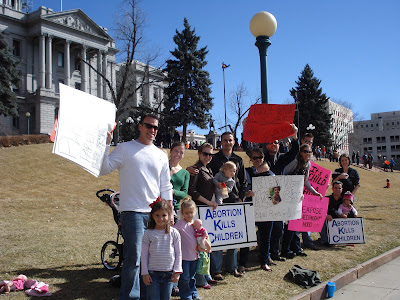 Protesting at the state capitol last weekend in celebration of Planned Parenthood’s nationwide “Voices for Choice” rally, which basically involved about 150 very, very angry women marching with dogs and timid husbands/boyfriends in tow, decked out all in orange and shouting things about their vaginas to bemused, mounted police officers lining their protest route.  Oh, and of course, screaming at us as they walked by about how we were clearly retarded.  Which, I believe, really jives with their stellar record for political correctness.

See those cute little girls standing in front?  Don’t they look totally retarded?  One kindly old man even knelt down to child’s eye level and screamed at Sophie, the one holding the baby doll, “GOD ISN’T REAL!”, spraying her with spittle.  After which point she blinked up at her mom in confusion, who helpfully clarified for her that “that man is just like the mean kangaroo in Horton Hears a Who, remember honey?”  ( I might add as a disclaimer, no mention of God was made, either on signs or vocally, but the Dr. Suess quote Sophie was proudly displaying must have set off his satanic rage-o-meter.  Note to exorcists.)

Also, the men who accompanied us, (the very handsome and talented men, I might add) they were also “retarded” and “oppressive of women.”  Even the hot firefighter who was wearing his baby.  He was totally oppressing that poor woman by sharing equitably in the childcare responsibilities…

But my favorite part of the day?  The absolute radiant JOY which our motley crew displayed, even in the face of unbelievable vitriol and hatred being thrown our way.  We were each of us peaceful, smiling, and, for the most part, silent.  Standing witness for those whose voices have been silenced most unjustly.  And for any who observed the interactions between our two sides, I think the distinction couldn’t have been more clear.  Evil is ugly, plain and simple.  Dress it up and call it what you like, but you can’t make it beautiful.  Similarly, you can’t hide the beauty of the truth.  It shines through, casting light into dark corners.